The proposed Wharekirauponga Underground Mine is located north of Waihi, beneath Forest Park administered by the Department of Conservation (DOC).
This mine would be accessed via an underground tunnel from private land on Willows Road, outside the Forest Park, allowing us to minimise our surface impacts.
An interconnecting ore transport tunnel back to our existing Processing Plant allows us to transport materials in and out of the Wharekirauponga area without vehicles on public surface roads. 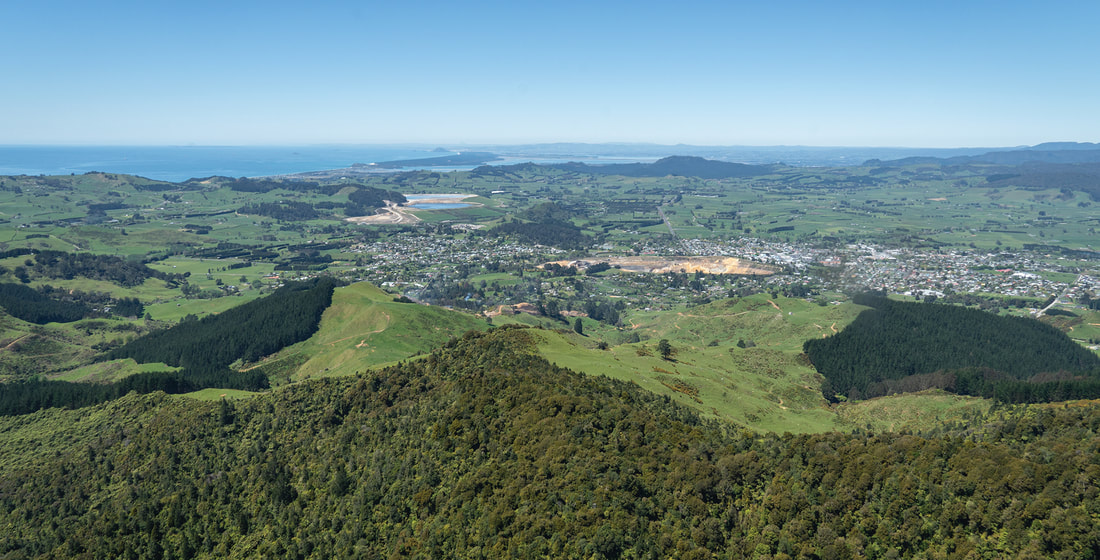 ​We recognise the significance and sensitivity of the Wharekirauponga area and its ecology, which is an important recreational area, and home to several native and endemic species. That’s why any potential mining operation we may undertake within the Forest Park would only be underground – not at the surface level.

The Wharekirauponga Underground Mine consists of four sub-components: 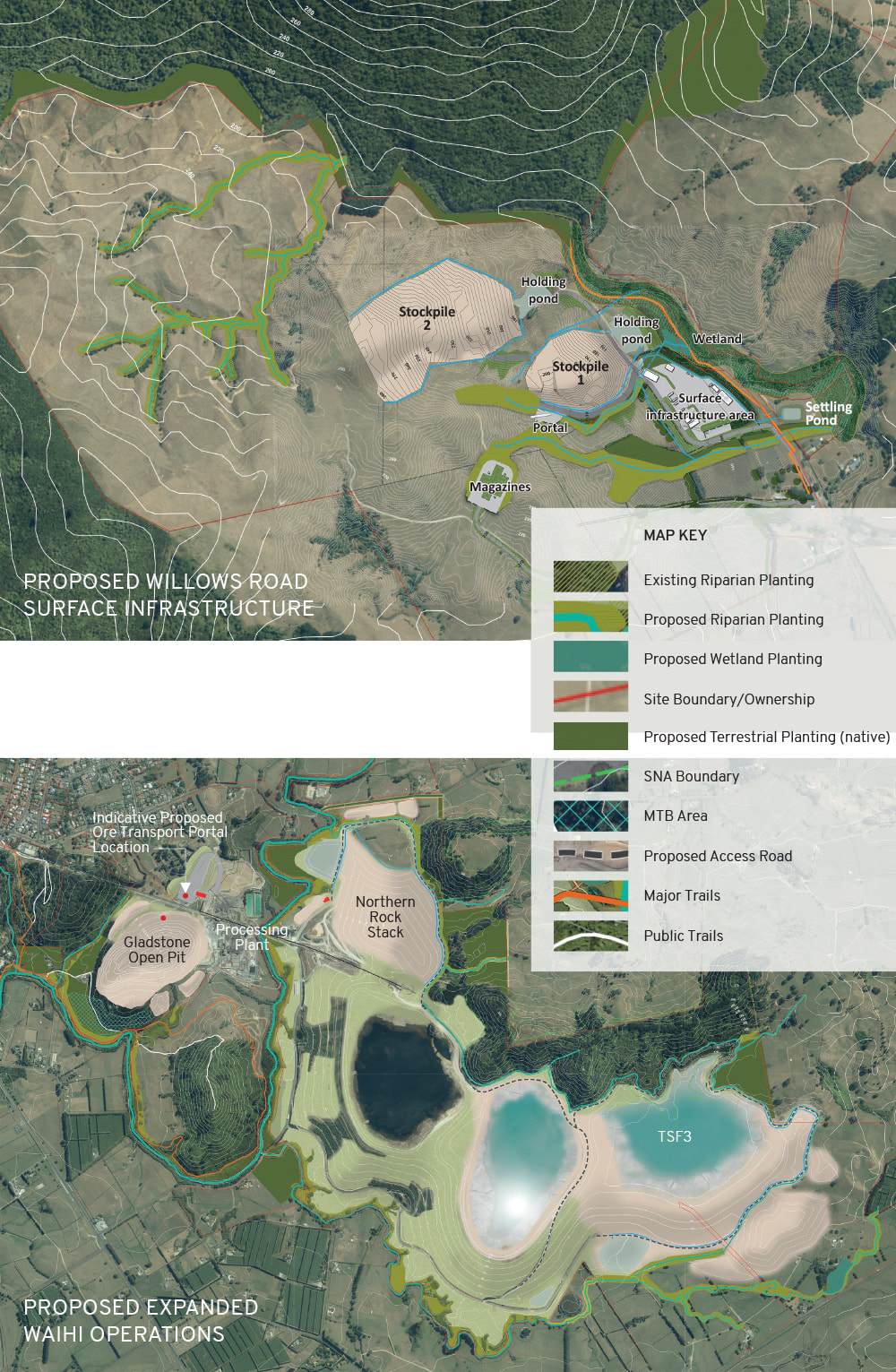 DUAL DECLINE OREBODY ACCESS TUNNEL
We are proposing a 6.8 km dual decline tunnel that extends from a portal on private land at the end of Willows Road, Waihi, to the base of the Wharekirauponga resource.
A dual decline tunnel consists of two tunnels running in parallel, with short connections between the two created every few hundred metres. Bulkheads are also installed on these connections, providing the ability to seal one tunnel from another as needed for standard air flow and water egress considerations, or in the unlikely event of an emergency situation. This design provides a high level of airflow throughout the mine and minimises the number of ventilation raises that are required at the surface.
Tunnelling would continue until the orebody at Wharekirauponga is reached. Upon reaching the orebody, development drives would be undertaken to allow mining to commence. These development drives would be similar to the drives that have been successfully constructed for the existing underground operations in Waihi. 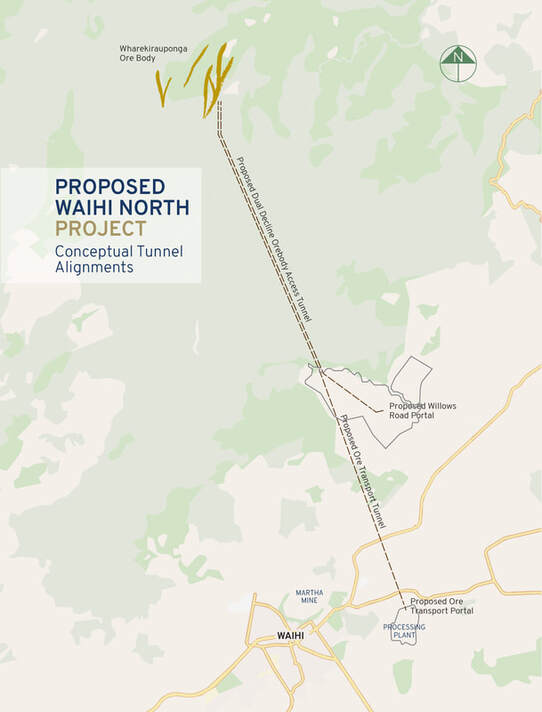 ​
ABOUT THE TUNNELS
These tunnels would be developed using a drilling and blasting method. This method would use modern drilling jumbos, rock loading units, and supporting equipment. This is similar to how we currently develop drives in our underground mining operations at Waihi. The drilling jumbo would be electric. Other tunnelling equipment including loaders, haul trucks, and service vehicles would be battery operated where possible.
Rock extracted through the tunnelling process would be loaded into trucks and then hauled to one of two temporary surface stockpiles at Willows Road. The stockpiles would be lined with a low permeability base and would have a maximum height of 15 m above the existing topography. As mining progresses, this rock would be returned into the Wharekirauponga Underground Mine for backfilling purposes.
Technical studies and consultation around final tunnel alignments is ongoing.
​
HOURS OF OPERATION
OceanaGold Waihi is proposing that the Wharekirauponga Underground Mine would operate 24 hours a day, seven days a week.

​NOISE
If the Waihi North Project is approved, we will be required to manage our activities so that we comply with strict noise limits set through the regulatory approvals process.
There are a range of noise management measures that may be implemented to meet these requirements, including:
BLASTING AND VIBRATION
A key consideration for OceanaGold Waihi in developing the proposed Waihi North Project is any potential amenity effects our operations may have on residents.

WILLOWS ROAD PORTAL
Due to the location and direction of the dual decline tunnel system to the orebody, residents close to the Willows Road portal are unlikely to experience any reduction in amenity due to vibration from its development.
Interconnecting Ore Transport Tunnel
We are still finalising the technical studies for the tunnel alignment back to the Waihi Processing Plant. Any associated amenity effects on property in relation to the tunnel would only be temporary and localised during the development stage. Once the tunnel is completed there would be no appreciable ongoing effects to amenity.

AIR QUALITY
If the Waihi North Project is approved, we will be required to comply with consent conditions for air quality set through the regulatory approvals process. This will require OceanaGold Waihi to produce an Air Quality Management Plan.
There are a range of air quality management measures that may be implemented to meet these requirements, including:
GROUND SETTLEMENT
By utilising proven mining techniques, we will protect from the negative impacts of surface settlement both at the mine and along the tunnel route.
Mining of the orebody will occur entirely from the underground tunnel utilising the same proven methods we currently employ for our Correnso and Martha underground projects. Mining voids will be backfilled with rock as we progress.

DEWATERING
OceanaGold Waihi expects to encounter some water inflows during the operation of the mine. Water inflows, together with any water used in the mining process, would be pumped to surface holding ponds at the Willow’s Road Portal. We are proposing that this water would then be pumped to the existing OceanaGold Waihi Water Treatment Plant for treatment if not suitable for onsite discharge. Boreholes would be drilled ahead of workings to detect water bearing structures and appropriate mitigation applied to avoid significant water inflows.

​Ventilation raises, providing fresh air supply to the Wharekirauponga Underground Mine, would be required to supply sufficient air for a safe working environment and to provide emergency exits.
Based on the current design, we are proposing to construct five ventilation raises. Four of these would be within the Forest Park area, either on Forest Park administered by the Department of Conservation (DOC) or on unformed Hauraki District Council road reserve. The fifth would be located on private land off Willows Road near the tunnel portal.
​
OceanaGold Waihi is proposing that stringent ecological conditions be applied, to ensure that sites are appropriately selected to mitigate adverse effects on flora and fauna, habitat values, and to minimise landscape disturbance.
We will ensure minimal disruption and carry out detailed technical studies before we embark on any tunnelling. Studies are ongoing to ensure that the vent locations have minimal effect on the environment and are placed to avoid areas of high value habitat.
A drilling platform would be established on the preferred site and exploration, geotechnical, and hydrogeological drilling and analysis would be undertaken. Should the location be declared unsuitable, an alternative drill site would need to be established and the process repeated. The tunnel design will be finalised upon identification of suitable ventilation shaft locations.
These raises would be temporary structures in place for the life of the mine and would be fully rehabilitated upon completion of mining. The construction of the ventilation raises would occur from the underground, with the final surface footprint being approximately 8 m x 8 m each.
A vent stack would be established at the top of each ventilation raise. These would be installed by helicopter and remain in place for the duration of the project. The surrounding disturbed area would be rehabilitated.

To facilitate the construction and maintenance of the tunnels, some surface infrastructure would need to be constructed at the Willows Road farm property.

​SITE ACCESS ROADS
A sealed private road from the western end of Willows Road onto the site would need to be constructed. A haul road constructed of rock would be established from the portal to the rock stockpiles, with a connection to
a workshop and a wash pad.

OFFICE AND CHANGE HOUSE
At the site of the portal, an office and changing rooms would be established. These would be comprised of modular, temporary style buildings with an approximate footprint of 250 m2. Power and water connections would also need to be arranged, and a sewage system installed.

SERVICE WORKSHOP AND REFUELLING
OceanaGold Waihi is proposing to build a temporary service workshop constructed from shipping containers. The workshop would include a sealed undercover area of approximately 400 m2. Re-fuelling would be undertaken via a dedicated fuelling truck until the tunnel had progressed, at which point an appropriately certified tank would be installed underground.

ROCK STORAGE
Rock extracted through the tunnelling process would be stockpiled in the tunnel, loaded into trucks, and then hauled to surface stockpiles at the end of Willows Road. Two stockpiles of approximately 4 Ha each would be required to temporarily store this rock. The stockpiles would be lined with a low permeability base to minimise any seepage and would each be built to a maximum height of approximately 15 m above the natural topography.
Stockpile contact water would be collected in a holding pond and pumped back to the existing Waihi Water Treatment Plant for treatment if not suitable for discharge on site.
All rock from the tunnelling stockpiles will be progressively returned underground to backfill mined voids in the first four years from commencement of mining, approximately nine years after commencement of first site works.
Once the Willows Road rock stockpiles are exhausted, the stockpile sites will be rehabilitated and further rock for backfilling voids will be obtained from the NRS and transported using the interconnecting tunnel from the existing Processing Plant.

EXPLOSIVES MAGAZINES
Explosives magazines that conform to New Zealand hazardous substances regulations would be located on site. The locations are yet to be determined, but would be selected to ensure there are adequate offsets between publicly accessible land and existing structures.
The explosives magazines would be locked and securely fenced, with access strictly controlled.

PORTAL
A 6.5 m x 5.5 m portal on private land at the end of Willows Road in Waihi would form the entrance to the access tunnel. A second portal would also need to be established at the existing Waihi Processing Plant to provide access to the interconnecting ore transport tunnel.
Following geotechnical investigations to confirm the suitability of a portal location, earthworks would be undertaken to form these portals. Appropriate earthmoving equipment would be utilised and, if necessary, blasting would be used.
Once the face of the portals have been established they would be supported by steel arches, rock bolts, steel mesh, and concrete. Other service infrastructure would then be installed at each of the portals including temporary ventilation fans, water storage tanks, transformers, lighting, and a safety tag boards.

LIGHTING
To allow us to operate outside of daylight hours, lighting will need to be established around the proposed portals.
The lighting will be designed and located so that the amount of light is protective of the amenity of nearby residents.

​A key project commitment is to initiate and sustain an environmental net gain throughout the life of the project, such that the immediate area and environment is left in an improved state from an ecological perspective than had the project not taken place.
At the Willows Road infrastructure area, we plan to:

​At closure of the Wharekirauponga Underground Mine, all vent stacks would be removed, and the ventilation raise shafts would be closed. The shaft collars would be covered over and prepared to encourage natural revegetation.

​The effectiveness of this rehabilitation would be monitored and managed for a period of no less than five years following closure to ensure the success of the remediation.
The tunnel portals will be securely sealed, and the entrances backfilled with rock prior to the placement of topsoil.
A minimal amount of rock may not be returned underground as backfill. This rock would be sealed with a capping layer and rehabilitated with topsoil and planting.
All surface infrastructure at Willows Road will be removed, and footprint areas fully rehabilitated. 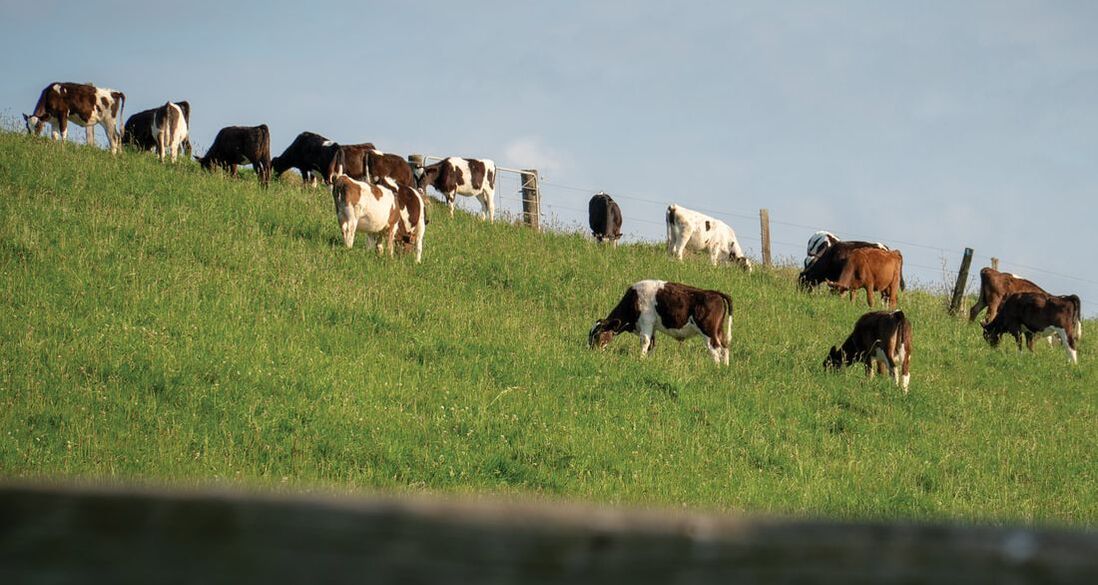